New here? You may want to subscribe to our RSS feed. Enjoy!

About an hour ago we got an ecstatic call from a customer, whose storm shelter we just installed a few weeks back, who wanted to let us know they were going to be on TV tonight.

A Huntsville channel 48 WAFF newscrew came out and interviewed them and took some photos and video of the completed install and shortly thereafter the Alabama EMA as well.
(Full details at this link here: http://www.waff.com/story/16105346/fema-approves-180-safe-rooms-in-alabama)
Ever since the Huntsville tornado storms tore through Northern Alabama in April 27 2011 creating record-breaking amounts of damage, there’s been a governmental effort to assist some of those worst hit.  FEMA stepped in once the state of Alabama was declared a disaster area and has promised funds to install storm shelters that meet or exceed FEMA requirements to ensure people have safe shelter in the event of the next potential severe storm.  The cutoff to apply for such funds passed months ago and now some of the FEMA money is beginning to show up.

Dekalb county of Alabama was one of the first counties to begin receiving this FEMA money and aid.  Just a few weeks ago, Lifesaver Storm Shelters of North Alabama participated in helping a home owner who qualified for the FEMA money to complete their paperwork to ensure they would get their partial reimbursement monies from FEMA after having installed their underground Lifesaver Storm Shelter (or safe room as FEMA refers to them as).
So far 180 safe room applications have been approved by FEMA for the state of Alabama, and our understanding is that due to the extensive damage in Dekalb county that a good majority of the funds would first be distributed there.  We also understand that Franklin county is also now receiving FEMA money for it’s residents to compensate them (up to 75% or $4,000) towards any storm shelter or safe room installed that meets FEMA requirements as well.
You can learn more via that WAFF 48 newscast featuring Gary Heymon and his recently purchased and installed LS-12 underground Lifesaver Storm Shelter by clicking on the following link (or hit play below to watch the newscast): http://www.waff.com/story/16105346/fema-approves-180-safe-rooms-in-alabama
For the lastest news and information, as well as important safety and severe weather tips, visit (and “LIKE”) us on facebook by clicking here now.
Hans Schoff
Lifesaver Storm Shelters of North Alabama
http://HuntsvilleTornadoShelters.com

PS> Have you signed up for your WeatherCall @Home, the address-specific, storm-specific FREE service that will actually CALL, TEXT and EMAIL if severe weather is headed to your home?  What are you waiting for – ’tis the season!  Sign up here now

This site uses Akismet to reduce spam. Learn how your comment data is processed.

Tour of a Lifesaver Storm Shelter

We want to help you and your family stay safe in severe weather.

To prove it & thank you for visiting our website and spreading the word, we're giving you:

-- FREE *Exclusive* Severe Weather Guide App for your iPad or Tablet, to keep you informed and in the know, even on the go

-- PLUS, an informative email series to help you decide what severe weather preparations are best for you and your family

Just enter your info in the form below now to get these FREE resources and emails to keep your family informed and safe in severe weather - FREE! :

Get Your Tornado Survival Kit Here! 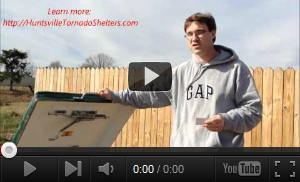